The Other Aurora - Chapter Ten: Ghoul 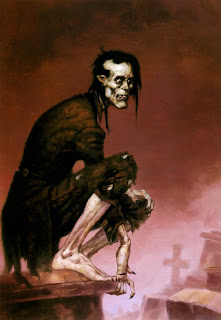 Aurora couldn't believe Philip's words. She had finally been awakened, but her whole family and loved ones were still under Maleficent's spell. It seemed that, even though she was dead, Maleficent still had some power over her. Aurora felt cursed for life.

Philip allowed her to cry and embraced her over and over again to make her feel supported and understood, still he felt he could not quite reach her. They would both need time to open up and act the way they used to act around each other before the curse.

'We'll find a way to make it right, Philip,' said Aurora in tears.

'Of course, my love,' said Philip looking straight into her eyes.

They both stared at each other for some seconds and sealed this pact of hope with a tender kiss.

'What was that?' screamed Aurora, standing up.
'Did you hear that?'

Philip looked all around but couldn't see anything. However, after some time, he could hear a screeching sound, accompanied by a strange grunting.

'Stand behind me!,' ordered the Prince as he took his sword.

Being a cloudy night, the forest was pitch dark and the only light they had was coming from the fire Philip had made.

'There it is again,' whispered Aurora
'That noise...I think it's coming that way.'

Philip looked to his left and could see a pair of red eyes coming closer and closer.

And so the creature became visible to them.

It looked...undead. Philip had never seen such a creature before. It had straight black hair, long, bony arms and sharp nails. Rags of unrecognisable clothing hanged from it and it seemed to be trying to say something, yet all it managed to say were strange, grunting sounds. This creature had obviously been a man, but he had no trace of humanity left and he had such a horrifying look on his face, a look of despair and grief.

The Other Aurora - Chapter Nine: Conversation.

“The most fruitful and natural exercise for our minds is, in my opinion, conversation.”
Michel de Montaigne

As Philip lit a fire with some tree branches and dry leaves, Aurora felt she needed to engage in some kind of conversation with the man who had just saved her. It felt only natural and reasonable to do so. Besides, she knew Philip was the love of her life...maybe as they talked and spent time with each other, the flame of love would be rekindled.

'Philip...you haven't told me much about what happened after I was put to sleep,' said Aurora in a low, hesitant tone.

Philip was paralyzed by these words. He had been trying to avoid this matter ever since he had kissed her and woke her up. It was evident he would have to talk to her eventually, but he never thought it would happen so soon.

He had just managed to lit a fire, so he asked her princess to sit next to him and as he stared at the flame, he told her what he knew.

'Aurora you must understand that it has been five years since Maleficent cursed you. Some curses are more dangerous than others...and the sleeping curse is one fo the most powerful of all.'

'You don't have to tell me that...I haven't been sleeping peacefully at all these last five years,' interrupted Aurora.

'I cannot imagine what you have been through, but Maleficent's curse also affected some people of the kingdom...'

'What do you mean?' asked Aurora in a halt.

'Please, calm down. Everything can and will be reverted now that you have been awakened. Time is a treacherous thing, but we have started the journey back to restoration.'

'Please, please tell me what I know you're hiding from me...,' begged Aurora in tears.

Philip embraced her and held her in his arms for some seconds until he finally spoke.

'The curse affected your parents, the fairy godmothers and some people from the court. They, too, were put to sleep..."
Posted by J.P.D. Iuvaro at 7:05 PM No comments:

The Other Aurora - Chapter Eight: Journey.

“The only journey is the one within.”
Rainer Maria Rilke 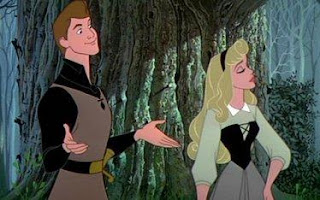 As they started their journey back to the kingdom, Aurora was shocked to find a devastated landscape. There were no sounds of birds chirping, running water or crackling fire lit by peasants. The kingdom she once knew was gone for good.

She remained silent most of their journey into the forest, until they arrived to a stream where Philip let Samson rest and drink some water, and he improvised a shelter to spend the night.

"How are you feeling?" he asked Aurora.
She waited for a moment, avoiding his eyes and looked down.
"I am still getting used to...being awake. I feel numbness in my arms and legs and..."
"Oh, don't worry," Philip interrupted. "It'll all get better as days go by." "We just have to be patient."

Philip looked at her, staring deep into her blue eyes. He searched for some kind of confirmation, a trace of hope. He wanted to believe in what she was saying.

Aurora stared at him too, whispering to herself that she should not fear. This was the man she had once loved. He had given up everything for her. He had waited her for five years and rescued her from the greatest evil.

As they stood there in silence, Aurora started to feel and to remember.

She loved him. The feeling had not changed, but...had she?

The Other Aurora - Chapter Seven: Joy.

As they got closer to the gates of the palace, Aurora asked Philip to put her down. She wanted to walk, or at least to give it a try. She took baby steps first, unsure of how her body would respond after five years of lying unconsciously.

'Samson!' screamed Aurora in tears. She recognised the horse that she had ridden years ago. In fact, that horse had been the reason of her meeting Philip. She hugged the horse and he seemed to recognise her as well. Samson leaned his head closer to her in what looked like a perfect picture to the blissful Prince.

'Let's go, we should be on our way to reach safe grounds before nightfall,' said the Prince.

Aurora hopped on the horse almost without help. It seemed she was getting her strength faster than Philip would have imagined. And so the Prince took a second to savour such perfect moment: her Princess awakened after all the sorrow and obstacles he had had to endure.

The Other Aurora - Chapter Six: Worries.


Philip also witnessed the devastated kingdom. It was clear that the cursed had been broken for Aurora, but the rebirth of the kingdom would need more than a Prince's kiss. However, this was not the time to worry about that. First things first: Aurora was back and she had a long journey home.

What worried Philip the most was whether the people affected by Maleficent's curse had also woken up from their slumber or not. One thing was to deal with a bunch of dead trees and run down towns, but having the whole inhabitants of the kingdom asleep was something different.

As far as he was concerned, Aurora's parents, the fairy godmothers and the people from the court had been put to sleep when the curse became effective. However, he ignored whether throughout the years the curse had spread to the inhabitants of the kingdom and its whereabouts. Since he fled the place as soon as Aurora was put to sleep, he had no idea the conditions in which it would be now, after five years.

The Other Aurora - Chapter Five: Desolation.

“Desolation is a file, and the endurance of darkness is preparation for great light."
St. John of the Cross. 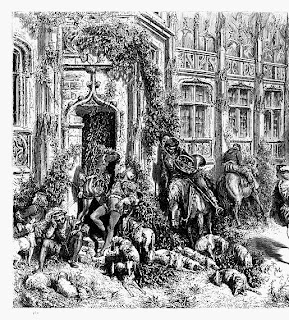 Image: The Eerie Silence of the Palace, an Engraving by Gustave Dore.


Philip could not believe that she was finally awake. He embraced her and she corresponded, yet her weakness was obvious. Aurora could barely move. However, she smiled broadly and touched his cheeks  showing her Prince that she felt as blissful as he did.

'I cannot believe this is finally over,' said the Prince, sitting right beside her and holding her hands.

'I...I feel so tired. Ironic, right?' uttered the Princess in a monotonous whisper. She could barely speak.
'How long have I been...?'

'Asleep? It's been five long years,' answered Phillip.
'You have a lot to catch up to, but there will be time for that.'
'Now we have to get you on your feet.'

'I can feel my legs and my body, but I don't know whether I'll be able to move,' explained Aurora. She felt uncertain and somewhat scared.

'There's no need for that, I will carry you, my love.'

Aurora smiled again, she was confused and happy at the same time. It had been five years...she had to get used to everything again. As Philip leaned closer to her and lifted her up, she could gaze through the wooden window and felt appalled by what she saw.

The whole kingdom, the beloved land of her parents looked desolated. Dead trees, run down villages, caws of crows, the most evil of all birds...and exactly behind the Ogre Mountain, her royal palace stood completely destroyed.
Posted by J.P.D. Iuvaro at 1:00 PM No comments:

The Other Aurora - Chapter Four: Awakening.

“Perhaps it is better to wake up after all, even to suffer, rather than to remain a dupe to illusions all one's life.”
Kate Chopin. 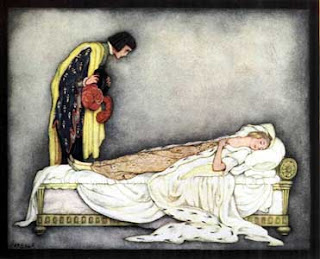 How could this be? This isn't possible, thought the Prince struggling not to burst into tears of desperation. Aurora was not only his hope, but also the hope of a new beginning for the kingdom. If she didn't wake up, everything would have been in vain, meaningless.

As he stared fixedly at her, paralyzed by her obvious slumber he suddenly felt a movement in the lower part of the bed. Astonished, he stood up in a halt and could see that Aurora's legs were starting to move slowly. Her arms and torso followed, as if in a coordinated rhythmic movement, slow, yet firm and consistent.

Philip was awestruck, he just stood there looking at her beloved Princess regain consciousness after all these years.

And finally, without any further anticipation. She opened her eyes.